It's not just a book thing!

The fifth Guernsey Literary Festival is over – and what a wonderful few days we have had.

There have been so many highlights: two crime writers, Rachel Abbott and Clare Mackintosh; the beautiful writing of Sarah Moss; a feature film, Departure; children’s events at Castle Cornet; discovering what a public edit is and why it’s so useful for writers; music at the Fermain Tavern and a celebration of young writing talent on the island. With so many events from which to choose, you will have your own highlights and I hope you got something out of everything you attended. 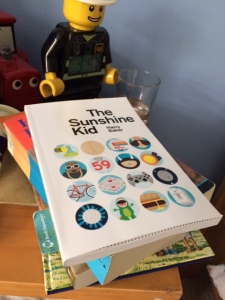 Slam poet Harry Baker was a total revelation – not just for me, Katie has written about how funny and moving she found his performances and she’s spot on. I took my 11-year-old son to see him and wasn’t sure if he’d appreciate the poems but he really did, and is now the proud owner of The Sunshine Kid, signed by Harry. The audience at the Fermain Tavern was equally captivated – you could have heard a pin drop when Harry was on stage. He’s hilarious without being vulgar or unkind; he makes you laugh and warms your heart, and his playfulness gets you falling in love with language all over again. He might even make you see beauty in the German language (no offence, German language, but I dropped you at school in favour of French and Spanish).

Overall, it’s the fantastic atmosphere that I’ve loved at all of our Festivals. Chatting with like-minded people, getting inspired, seeing our visiting speakers popping into the Hub to catch each other’s talks, and feeling proud of what a team of volunteers can put together. It makes me happy that, on top of everything else Guernsey has to offer, it can be a literary, cultural destination too. Well done to Claire Allen and all the team – here’s to number six.

This entry was posted on May 15, 2017 by guernseyliteraryfestival.